My sister and I got to the Javits shortly before the Exhibit Hall opened at 10 am. The first thing we went to, because we saw it right there, was Christmas Land – which was this whole display for the promotion of NOS4A2 on AMC.

They had this promotion where if you go to the Facebook app and take a picture of your face it will turn it into one of the creepy kids. Speaking of which, the actors there dressed up as Charlie Manx and the kids were so good. Like, I couldn’t look at them. Too creepy.

Anyway, I didn’t want to get the Facebook app and do it so we just took a photo with Charlie and we got a gift from The Wraith. It was a gingerbread cookie! It was so good too.

I thought it would be a Christmas ornament. Some people did get that. I am glad we got the cookie. 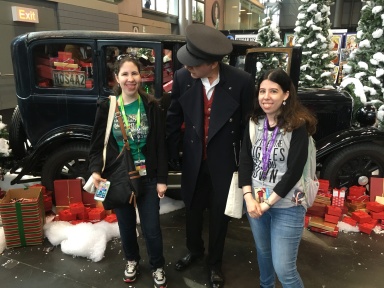 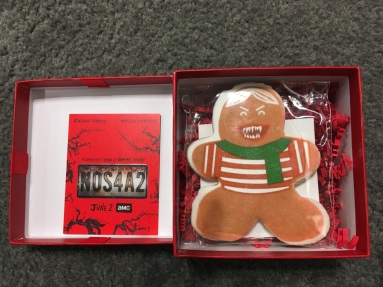 So, then we went to the Penguin Random House booth to get a pin my sister saw being promoted on Tumblr for The Starless Sea. We got the pin but we also found out that there was a signing with Erin Morgenstern. She was signing ARCs of The Starless Sea. The tickets were already gone and we were just really annoyed that that signing wasn’t promoted better. We would have gone there first had we known.

I think next time we are making a bee line for that booth first.

On a happier note, my sister’s memory made it onto this board for the promotion of Recursion by Blake Crouch. Hers is the gondola ride in Venice. 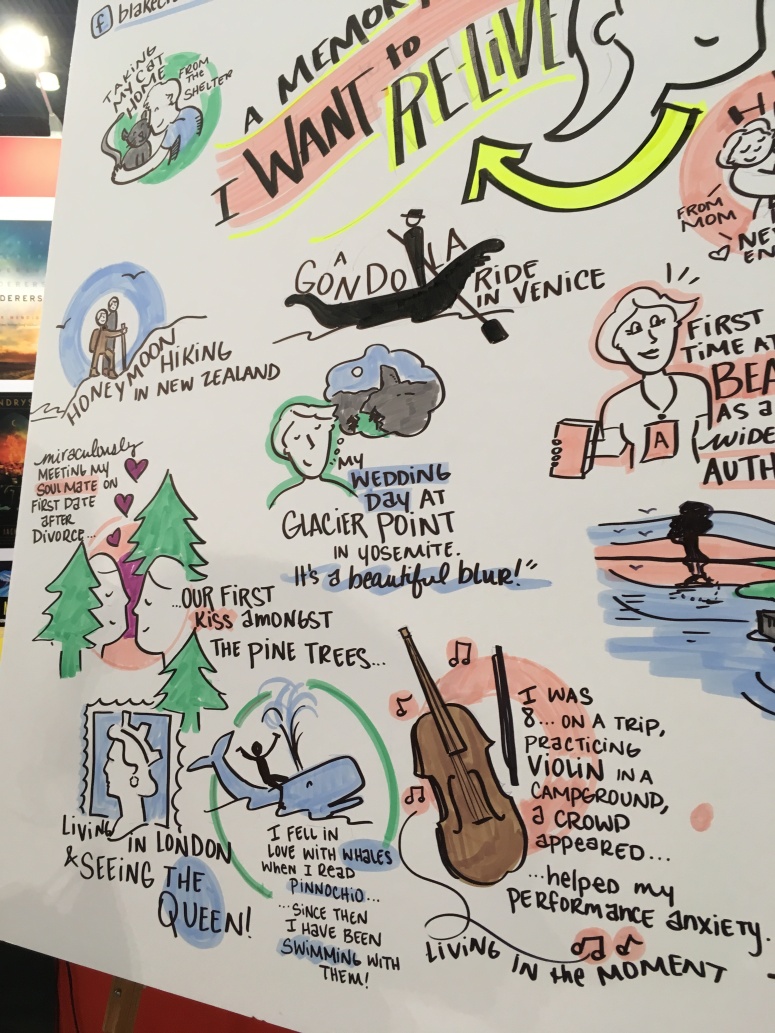 Since my sister and I spent much of the afternoon in panels, and on the autograph line for Joe Hill, we only got two books each.

We played a game at Underlined where we rolled a die and got the ARC we landed on. I was hoping for Wilder Girls by Rory Power but I got Full Disclosure by Camryn Garrett. My sister got House of Salt and Sorrows by Erin A. Craig.

We also went on a line that was for a beach read theme. They had some beach chairs and beach balls that you could pose with once you chose your book, but we didn’t do that.
I forgot how we even decided to choose our books. I think they told us the genre and we picked. I chose mystery and sis chose historical fiction. I got Disappearing Earth by Julia Phillips. My sister got The Flight Portfolio by Julie Orringer. 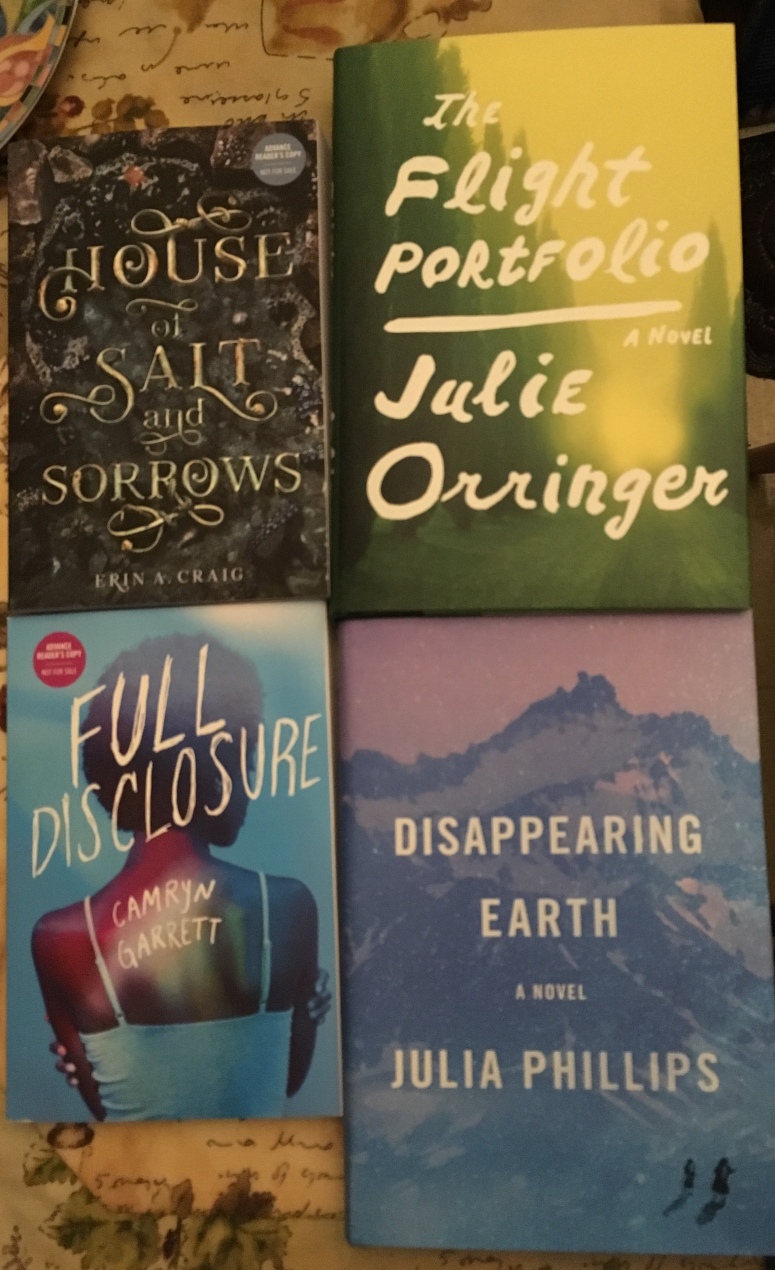 For our signing with Joe Hill I brought my copy of NOS4A2 and sis brought her copy of Horns.

He was really nice. I told him that I listened to NOS4A2 on Audible and we talked about how great Kate Mulgrew’s narration was. I told him how it was so creepy I would jump out of my seat.

He drew a little cartoon! 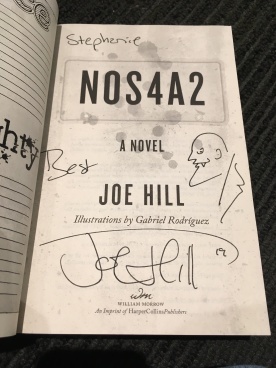 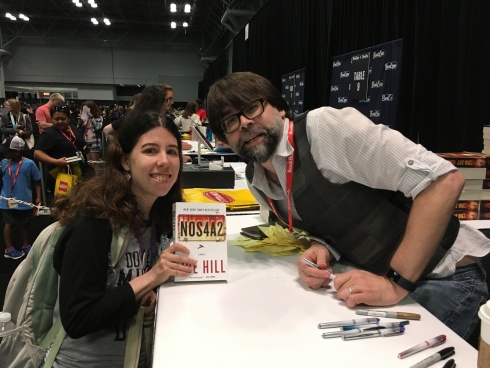 In the afternoon we went to two panels and Joe Hill was on both of them.

The first one was OH! The Horror! Joe, James Murray and Paul Tremblay were the panelists.

They talked about what scares them. Joe said rabies. Paul said Jaws. James said crimes with no motive.

They also talked about horror trends. Like with The Quiet Place or Bird Box – it’s about taking away an element.

Right after that panel in the same room was the panel for NOS4A2.

Joe and the show runner, Jami O’Brien, were on the panel. They spoke about the decision to age up Vic McQueen so that they could keep the same actress. So she starts off at 18 years old when she finds The Shorter Way bridge.

The bridge was inspired by a bridge in Bangor, Maine, that Joe and his childhood friends would dare each other to ride across. Some people ask: did kids in the 1980s really ride all over town on their bikes without their parents knowing (like in Stranger Things)? And the answer is: yes.

Joe joked with Game of Thrones over we need something on Sunday nights. Instead of Winter is Coming it’s Christmas Is Coming. He is also doing a low budget “Talking Dead” with a newsletter that fans can subscribe to called “Ask 4A2.”

Zachary Quinto was really invested in Charlie’s mission and backstory. His backstory from the comics and what was cut from the manuscript will be shown on the TV series. Joe said he gave the manuscript to his dad and was told to cut 20 pages because Charlie’s backstory was slowing things down. Then his American editor told him to cut another chunk of pages. Then his English editor told him to cut out the rest.

They decided to cast Charlie as an young man and use makeup to age him instead of Benjamin Button-ing him down in age. That was just more practical. And luckily Zachary Quinto was available.

When talking about magical objects (the bike, scrabble tiles, The Wraith) Joe said he was having nightmares and to help his wife would read to him. It was this unauthorized Narnia novel. So she would read to him and then he would sleep with the book under his pillow. And it worked.

They showed a scene and the map was shown. Names from his novel Horns (The Treehouse of the Mind) and from his dad’s novels (Pennywise) appear. When Joe was writing the book and making the map he was running out of names and so he threw those in. He likes to think of it as a shared universe in our heads. Like it’s one imagination. All of his stories share the same universe, except his short stories.

So this was an exciting surprise. Not all of the book is in a single season. If it does well it will get a second season to cover the second third (second half?) of the book!

I’ll Take Quidditch for $500, Please! An Audiobook Game Show was the first thing sis and I did on Sunday. That panel is always a lot of fun. Maybe one day I’ll get to play on my favorite author’s team.

After we went to the Exhibit Hall. The Penguin Booth was having a giveaway were you pick an era. Someone said that Ruta Sepetys’s The Fountains of Silence was one of them. That was what I had my heart set on.

That ordeal was a fiasco. People were “queueing” up an hour early. I say “queueing” with quotes because it was just a massive crowd. So then security was trying to get it organized, but it was still a confusing mess. They were like, if you have been here for an hour stay here and wrap around this pillar. If you just got here in the last 10 minutes stand over here.

Then a woman from the Penguin was like, we’re going to count how many books we have and start handing out numbered post-its.

They totally underestimated the anticipation for this giveaway and the skills they needed to keep it organized.

In the end sis and I did get a numbered post-it and picked the 1950s. We also got a pencil case with the book.

I went to Underlined to show them a preorder for a book of theirs and got this pillow case. 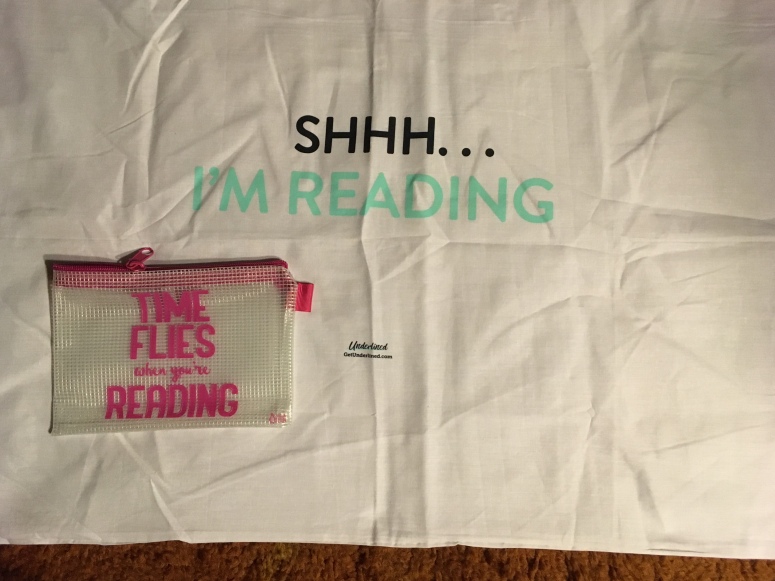 Sis and I also went on a queue for “blind date with a book.” Or whatever it was called. They had the books wrapped in different color paper depending on these genres: fiction, non-fiction, mystery, true crime, or historical fiction.

I chose historical fiction and got an old ARC for The Weight of a Piano by Chris Cander, which came out in January 2019.

My sister chose mystery (I think?) and was so bummed because she didn’t like the sound of the description so she gave hers away to someone.

Since she was so disappointed we got got back on the queue, but by then they were almost out of books and only had non-fiction left. That blind date was an ARC for An American Summer: Love and Death in Chicago by Alex Kotlowitz, which came out in March.

I think each genre had several different books wrapped up because we stood around to see what other people were unwrapping. And they all seem to be old ARCs they had on stock of books that have already been released.

More News Tomorrow by Susan Richards Shreve was something we picked up from the booth next to Penguin Random House. I forgot the name because they had packed up and left for the day, but they did leave some ARCs behind. 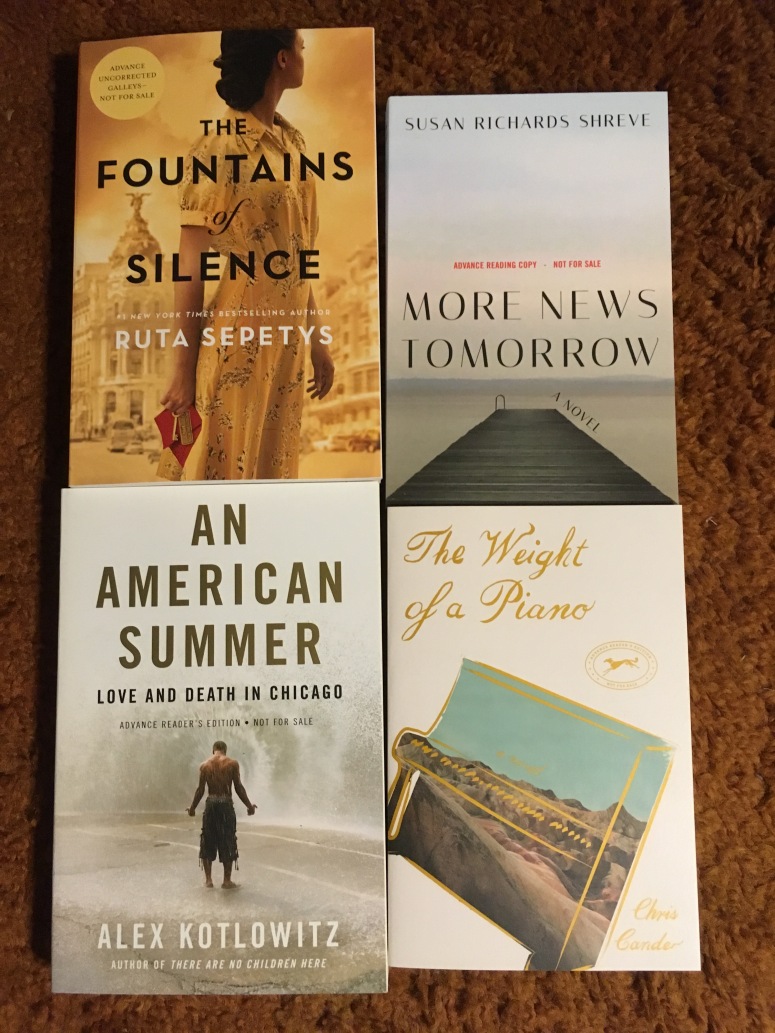 We also went to two more panels.
The Magic of World Building: Marissa Meyer, Marie Lu, N.K. Jemisin, Joe Hill.
They talked about where they find inspiration. Their different styles – like whether they outline or write by the seat of their pants. Or if they do both by wiring an outline but then going off course.

A big topic was how to incorporate world building into your story without writing an info dump. Inform the reader without making it sound like you are informing the reader.

N.K. Jemisin will used short stories as a tester for novels to see if there is enough material for more.

Then they also discussed how not to fall down the rabbit hole of world building. Set time limits when doing research. It’s a story, not a textbook. Just start writing as a character and figure it out as you go. Keep the characters talking and engaging.

The Great Book Debate was a panel that was a lot of fun.
Jennifer Donnelly, Sarah Enni, Marissa Meyer, Nic Stone, and Holly Black debated the qualities of books March Madness Style.

Books were pulled out a hat and pitted against one another in brackets. I’ll bold the winners for each round.
Round 1:
Charlie and the Chocolate Factory vs. Goosebumps.
The Jungle Book vs. Charlotte’s Web.
Nancy Drew vs. Lord of the Rings.
It vs. Frankenstien.
The Joy Luck Club vs. Alice in Wonderland.
50 Shades of Gray vs. Dionetics by L.Ron Hubbard. (I am not sure how to spell it and I am afraid to google it because Scientology is a cult.)
The Handmaids Tale vs. Curious George.
Invisible Man vs. The Color Purple.

Round 2:
Charlie and the Chocolate Factory vs. Charlotte’s Web.
Lord of the Rings vs. Frankenstien.
The Joy Luck Club vs. 50 Shades of Gray.
The Handmaids Tale vs. The Color Purple.

Round 3:
Charlotte’s Web vs. Frankenstien.
The Joy Luck Club vs. The Color Purple.

Round 4:
Frankenstien vs. The Color Purple

I really enjoyed this and I would go to that panel again.

So that was Book Con 2019!
Here are all the books. As I review them I’ll add the link below.

Full Disclosure by Camryn Garrett.
House of Salt and Sorrows by Erin A. Craig.
Disappearing Earth by Julia Phillips.
The Flight Portfolio by Julie Orringer.
The Fountains of Silence by Ruta Sepetys.
The Weight of a Piano by Chris Cander.
An American Summer: Love and Death in Chicago by Alex Kotlowitz
More News Tomorrow by Susan Richards Shreve.