Day two! The big panel today was the one for Episode IX, but my sister and I had a photo op with Warwick Davis at the same time. So I didn’t even bother entering the lottery for it. I have read online from the fandom that usually when Warwick is hosting panels during Celebration he does not do autographs and photo ops. So when it was announced that he was I thought we should take the opportunity.

Of course I was also holding out for Hayden’s announcement (he was the last guest to be announced) so I held off on Warwick’s op a little bit. His autographs was selling out fast but I’ll try to get that another time. I just really wanted the photo.

But first I really wanted that exclusive edition of Master and Apprentice so we got an early shuttle (around 8 am) to go queue up at McCormick Place. Well it more like a massive crowd waiting outside the exhibit hall. We randomly “queued” up next to Dan and Melissa (who we met the previous day). We talked about our dislike of what was done to Luke in The Last Jedi. Let’s not go there right now. But it was nice to see them again and talk about Star Wars with them while we waited.

When they let us in my sister said she would meet me at Del Rey and being really petite I snuck through the crowds to get to Del Rey. And it was chaos! No queue. Just a massive crowd of people pushing with their fists out trying to get a bracelet. Three people were putting them on wrist. Other Del Rey people were acting as barriers with their arms out to stop people from mobbing the people behind the tables, I guess.

The man I was next to acting as a barrier kept saying “don’t push”, “don’t hit me”, “there will be more bracelets tomorrow”… Someone asked if he drew the short straw this morning but he said he volunteered!

It was almost impossible once someone got their bracelet to leave the crowd and the people behind the tables were saying let them leave. As they left we kept inching up, with our fists out, and eventually I did get a bracelet. It was close too because as I was almost there they said the beacon lit up that they were running low and don’t worry there will be more bracelets the next few days.

When I found my sister again she said she was worried and thought she should try to get a bracelet for me.

Then we saw that the Her Universe booth had a pretty manageable line. It was still long but it was moving. So we decided to get on and if we didn’t get close by the time we had to get to the photo ops we’d try again later.

Luckily we did make it to the check out within the half hour-45 minutes and bought the rest of what we wanted. All in time for our photo op!

I got the:
– Padmé ombré hoodie
– Tano sweatshirt
– Sisters of the Force t-shirt
– my first (and probably my only) Funko Pop of Ahsoka Tano (signed by Ashley)
– Padmé Nouveau, even though I already have this shirt, it is worn out. And since HU reissued it I seized the opportunity.

I’d like to give a shout out to the awesome hard working people at the Her Universe booth for being cool and efficient with the massive crowds at HU. Bravo!

I like the way they set up the Photo and Autograph area, though I do think that for all the talent they had there they could have used two more photo booths running. It wasn’t so bad on Friday but things were running behind on Saturday. I’ll get to that in the next post.

Warwick was really nice. It all went so quick but he had a bright smile, he made eye contact and shook our hands. And he liked our shirts!

As were leaving the photo op area we passed by Peter Mayhew’s table. It broke my heart to see him in poor health. He was hunched over and signing very slowly. He actually cancelled on Thursday because he was not feeling well. I wonder why he still does cons?

Then I went to the Artist’s Alley to pick up my preorders.
I bought “Guidance From Wolves” by Kaela Croft. She let us pick our number for the print and I picked 93 out of 250.

“This was inspired by my love of the mountains and the breathtaking views you can find in Colorado. I’ve always loved wolves and their domesticated counterparts. I wanted to showcase Ahsoka Tano post-Rebels Season Four with the white wolves, possibly in search of Ezra.” – Kaela Croft

I also bought “The Returned” by Dianne Vaznelis. The limited edition numbers were preprinted.

“I love the way Ahsoka’s life bridges different eras and storylines across the Star Wars universe — and she’s super fun to draw! I’m inspired by the color palette and style of art nouveau posters, and wanted to impart a little of that pastel prettiness onto Ahsoka, to highlight the grace and hope behind the powerful warrior.” ~ Dianne Vaznelis

Here are the other arts they had for sale.

Then we went to line up for Timothy Zahn’s signing at Anderson’s Books. It was at this time that they were showing the Episode IX trailer. We could hear the crowd at the Star Wars Show stage cheering and a somewhat muffled trailer. The guy behind us on the queue was nice and let us watch the trailer over his shoulder on his phone. It was impossible to hear though so he told us that Palpatine was laughing.

It wasn’t until later that night back at the hotel that we could watch the trailer and actually hear it.

Then we talked about theories with the guy and his friend. He said that in the novelization of TFA Kylo says to Rey “It’s you.” but that was cut from the film and who knows what that means. Maybe Rey is a Skywalker.

I like the title of IX “The Rise of Skywalker” and hope it means we get to see Anakin’s and Luke’s Force Ghost.

When it came time for Zahn to sign my books I asked if he had seen the Palmer mural and does he think that Thrawn looks like Pierce Brosnan? Zahn said he did see it and he agreed.

I saw in Instagram that Palmer had used Brosnan as a muse for Thrawn many years ago.

And Zahn visited his booth!

We had to wait till after 12 to buy the Claudia Gray book at Del Rey because it was so crowded from the people watching the Episode IX panel at the Star Wars Show stage. So after Zahn’s signing we went to Del Rey. They cut the bracelet after I got my book. It’s so pretty! The book comes autographed and it came with the tote and the pin of Qui-Gon and Obi-Wan. 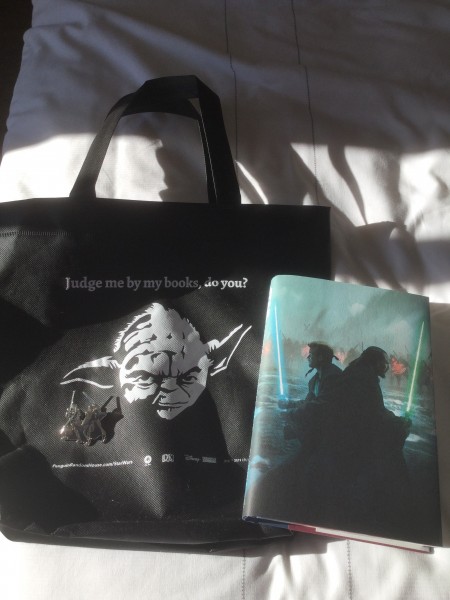 Our first panel: The Music of The Phantom Menace.
The host David Collins spoke about the musical connections between story and characters and broke down their themes.

He said imagine being John Williams returning to Star Wars after so many years and then watching TPM without music. What would he take away from it? These were the 3 core elements.

For Duel of the Fates he wanted something that really told the rivalry between the Sith and Jedi for centuries. And that the fight between them was an ancient ritual. Williams was influenced by the 5 sacred trees from the Battle of the Trees. He thought about what languages the choir could sing in and thought about Celtic or Greek but settled with Sanskrit. The vowels are great to sing because they are harmonious. Everyone will sing the same sounds.

He also broke down Anakin’s theme. 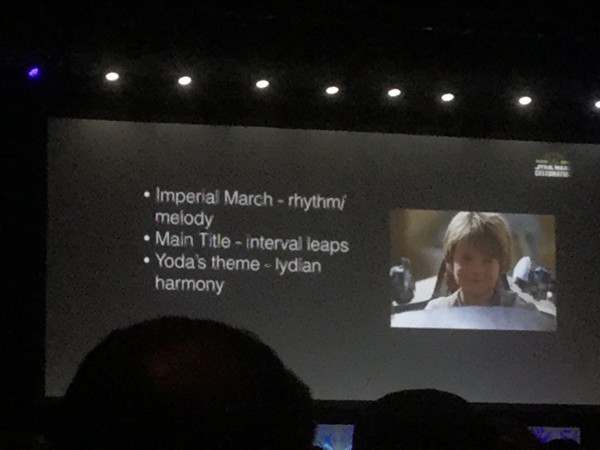 Collins also went a little bit into how he think Qui-Gon does have his own theme and back then was trying to stay spoiler free and was doing so well until he saw the back of the CD that said “Qui-Gon’s Demise” and he cursed. LOL

The last panel of the day was the fun game show (I love going to this panel at NYCC) I’ll take droids for $500, Obi-Wan. Marc Thompson was the moderator. Claudia Gray, Timothy Zahn and Delilah S. Dawson played with teammates from the audience.

They took a break to get to know the players and to ask their theories about “The Rise of Skywalker” title. I took video.

I like Claudia’s theory best, but I also just saw this video and I like the theory that it’s Ghost Luke back in character, being his optimistic self again.

At the end of the game Timothy Zahn’s team came from behind and won. Then there was a Q&A.
Zahn was asked about where does he think Thrawn and Ezra went.
He wouldn’t really say but he did say he wants to work with Dave Filoniand he has ideas for a 2 book series that would include Sabine and Ahsoka searching for Ezra.

Zahn was also asked if there are plans to bring Mara Jade back to canon. His answer: From the fans yes, from Disney – no idea.

Did he like the Thrawn comics? He did like them and thought they did a good job of adapting such a large book into a six issue series.

All the authors were asked if Lucasfilm comes to them or if they pitch their ideas. They said it depends. Sometimes they pitch and share their ideas. Like with Qui-Gon. At Dragon Con Claudia said she wanted to write a Qui-gon novel. She threatened that no one else can write it.
For Thrawn Lucasfilm came to Tim. For Thrawn Alliances Tim went to them and pitched his idea.

What story would they like to write?
Claudia wants to write something with the KOTOR characters.
Tim wants to write an Obi-Wan novel, post RotS where he feels he was being tracked and goes on an adventure to make the trail go cold. Obi-Wan just makes a loud nuance of himself.
Delilah wants to write a story about Kylo Ren at boarding school. Or something like that, I forgot.

A guy praised the audiobooks because he is dyslexic and wanted to know how they write so their story is in sync with the other stories.

The editors know all the projects so they will give the authors advice on how to shift their story, if it needs to be. Otherwise Lucasfilm gives them liberty to write whatever they like. They don’t give them a timeline and they will only step in and ask them to tweak something when it will contradict another project.

Delilah asked for the canon bible and Lucasfilm told her there is no bible. Just make it up.

That was a fun panel to be a part of. I missed the panel before it about Lucasfilm Publishing so that Q&A was like a Cliff Notes version.

In the evening my sister and I went to Eataly again. We were tired and it’s so easy to get to and the food is delicious. Plus, being Friday during Lent, no meat. So pasta dishes!