The first panel of the day was Family-Friendly Fantasy: Keeping it PG in the Age of Grimdark & Game of Thrones.

Most of the fantasy works we discovered as readers new to the genre were books the whole family could read together, without worrying about graphic descriptions of rape, torture, or violence. But many of the popular fantasy works being created today contain images that are simply too graphic for some readers. There’s a place for gritty realism in fantasy, but how much is too much?

The rest of the day was not crazy. The Sunday crowds certainly felt crazier than Saturday, but my sister and I didn’t have to run all over the place.
We saw Neil deGrasse Tyson talk at the SyFy Wire Live Stage. That area was packed and we were off standing at the side of the stage.
The only thing I remember is Neil talked about growing up in the Bronx and seeing the stars for the first time at the Hayden Planetarium. I love that place.
My sister and I split up for a bit.  She went to the Audible Harry Potter Pensive and I went to the Twilight 10th Anniversary panel. Catherine Hardwicke, Kellan Lutz, Jackson Rathbone, Edi Gathegi, and Josh Horowitz were there.
So, I didn’t take this video, but the whole panel is up to watch.
There was a lot of reminiscing about filming the first movie:  Twilight Tuesdays on MTV, the auditions, the cold and crappy weather when filming.
They also talked about how Catherine broke the glass ceiling for female directors and how the success of Twilight opened the doors for The Hunger Games and Divergent.
When asked what they took away from their experience working on Twilight Jackson graciously said it was like he was paid to go to film school. He learned a lot from Catherine and is now directing and producing himself.
My favorite parts were when Catherine showed her personal photos from on set and pre-production. That was really cute to see. I  liked the photo of Kristen and Jackson doing  a role reversal. He was human and she was the vampire. 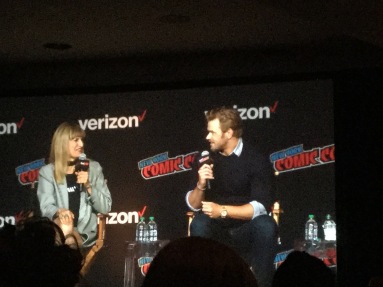 If you want to know what Jackson is doing in thatlower left photo he is describing what they had to do in Cat Class. It was to learn how to move like a vampire and losen them up.

There was a pre-recorded video from Kristen and a Skype call from Robert, which had a really bad connection and made for some comedic moments.

My sister and I also did the mystery give away at the Penguin Booth. She got Kill the Farm Boy by Delilah S. Dawson and Kevin Hearne. I got an ARC of Thin Air by Richard K. Morgan.

We also participated in a guessing game at one of the publishing booths. We had to guess the total number of pages of a stack of books.  I guessed 7,659. The answer was 8,240!

List of all the books:
Free:
Tomorrow War by J.L.  Bourne
The Waking Land by Callie Bates
I’m Thinking of Ending Things by Iain Reid
The Passage by Justin Cronin
Green Rider by Kristen Britain

ARCs:
Thin Air by Richard K. Morgan.
The Winter of the Witch by Katherine Arden

Not pictured -Kill the Farm Boy by Delilah S. Dawson and Kevin Hearne. 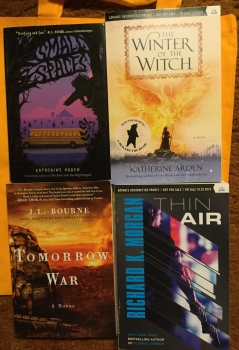 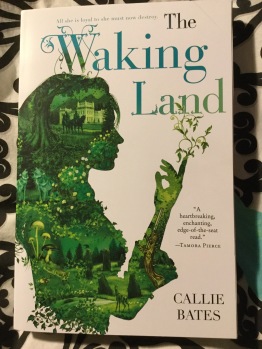