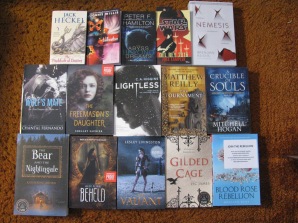 These are both books that I picked up at NYCC 2016 and the last two from that pile. I am sad to say I couldn’t get through either one.

A Crucible of Souls (Sorcery Ascendant Sequence) by Mitchell Hogan

When Caldan’s parents are brutally slain, he is raised by monks and taught the arcane mysteries of sorcery.

Vowing to discover for himself who his parents really were, and what led to their violent end, he is thrust into the unfamiliar chaos of city life. With nothing to his name but a pair of mysterious heirlooms and a handful of coins, he must prove his talent to earn an apprenticeship with a guild of sorcerers.

But he soon learns the world outside the monastery is a darker place than he ever imagined, and his treasured sorcery has disturbing depths.

As a shadowed evil manipulates the unwary and forbidden powers are unleashed, Caldan is plunged into an age-old conflict that brings the world to the edge of destruction.

I feel horrible saying this because I wanted to like this story. It is in a genre I love and the synopsis sounds really intriguing. But there was something about it that was not clicking with me and I can’t even identify what it is.

When I was nearly 100 pages in I had to give in and give up. I am not even sure if I will pick it up again one day and try again. There are just too many books on my TBR.

The Abyss Beyond Dreams (Commonwealth: Chronicle of the Fallers 1) by Peter F. Hamilton

The year is 3326. Nigel Sheldon, one of the founders of the Commonwealth, receives a visit from the Raiel—self-appointed guardians of the Void, the enigmatic construct at the core of the galaxy that threatens the existence of all that lives. The Raiel convince Nigel to participate in a desperate scheme to infiltrate the Void.

Once inside, Nigel discovers that humans are not the only life-forms to have been sucked into the Void, where the laws of physics are subtly different and mental powers indistinguishable from magic are commonplace. The humans trapped there are afflicted by an alien species of biological mimics—the Fallers—that are intelligent but merciless killers.

Yet these same aliens may hold the key to destroying the threat of the Void forever—if Nigel can uncover their secrets. As the Fallers’ relentless attacks continue, and the fragile human society splinters into civil war, Nigel must uncover the secrets of the Fallers—before he is killed by the very people he has come to save.

I could not even get through the first chapter. I thought it was just me so I went to read some of the 1 star and 2 star reviews on Goodreads. I found that a big reason I couldn’t get into it was that this is sort of a side story to another series. So the world building it already there and I was feeling a bit lost, no matter how much the author briefed the reader.

I kept reading reviews to see if maybe it got better and was worth going further, but many reviewers didn’t like how it switched stories and felt like a book within a book. Others said it started out exciting and then became boring. There was also a few complaints how it became too political in the middle. So I would have to be dealing with politics in a universe I am not familiar with.

Some fans of Hamilton’s even said that this was not the best of the series set in this universe.

Also, seeing a timeline of the history of the Commonwealth in the beginning was a bit intimidating.

In the end I decided have way too many other books to read. I can’t get involved in another series. Especially when they are long books. I saw one reviewer mention that at 640 pages this was one of his shorter books.

So I am moving on. Into the donation bag these go!

2 thoughts on “DNF: A Crucible of Souls and The Abyss Beyond Dreams”