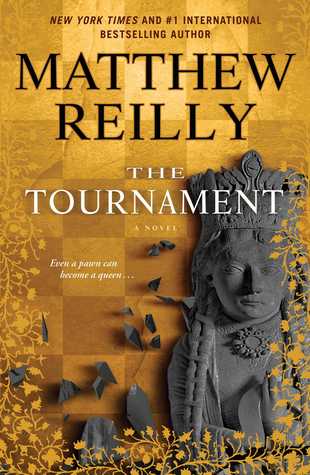 “A complete success; action fans and PBS types can share their enthusiasm” (Booklist, starred review) when a young Queen Elizabeth I is thrust into a gripping game of deception and lust at the height of the Ottoman Empire in this edge-of-your-seat historical thriller from the New York Times bestselling author of The Great Zoo of China and Temple.

The year is 1546, and Suleiman the Magnificent, the feared Sultan of the Ottoman Empire, issues an invitation to every king in Europe: You are invited to send your finest player to compete in a chess tournament to determine the champion of the known world.

Thousands converge on Constantinople, including the English court’s champion and his guide, the esteemed scholar Roger Ascham. Seeing a chance to enlighten the mind of a student, Ascham brings along Elizabeth Tudor, a brilliant young woman not yet consumed by royal duties in Henry VIII’s court.

Yet on the opening night of the tournament, a powerful guest of the Sultan is murdered. Soon, barbaric deaths, diplomatic corruption, and unimaginable depravity, sexual and otherwise, unfold before Elizabeth’s and Ascham’s eyes. The pair soon realizes that the real chess game is being played within the court itself and its most treacherous element is that a stranger in a strange land is only as safe as her host is gracious.

I got this book last year at NYCC.

There were many things I enjoyed about The Tournament, but I have a few criticisms.

This is very much like a fan fiction of actual historical figures.  But I like fan fiction and historical fiction so it was right up my alley. Besides Elizabeth I, Roger Aschman, and Suleiman, there are appearances from Michelangelo, Ivan the Terrible, and Ignatius of Loyola. Fictional characters are mixed in and the chess tournament and the murders are completely fictional.

I was invested in the murder(s) mystery and read through it quickly to find out the results. Sometimes I felt that Aschman was spelling things out to Elizabeth (and thus the reader) like a child, but then I remembered that she’s 13 and in 1546 a lot more innocent than than 13 year olds of today.

I liked how each part began with a brief, one page history of the history of chess pieces. I never knew the rook was once a chariot,  the bishop were elephants and the queen was the king’s minister. Besides solving the murders, the chess tournament was my favorite part.

Thank goodness for the maps printed at the beginning and for the list of the players for each match. I would have been lost without them.

One critique I have is that the language seemed a bit too modern for the time period. It’s not a huge distraction, but at times I said to myself, “That’s not how they would have phrased that.”

Another critique was the repetitive descriptions of gratuitous sex. Yes, there is a warning at the very beginning of the book.  I understand getting the point across that the horrible exploitation of women and children happened then (and sadly happen still).  So, I guess what my issue is is that Elise’s descriptions night after night were like – enough already. And that no one, except for a few voiced concerns from Elizabeth (that Elise brushed off), told her how naive she was being. (Did she learn nothing from Anne Boleyn and Catherine Howard?) Also, I was fully expecting Elise or someone to start showing signs of a STD, or the Plague.