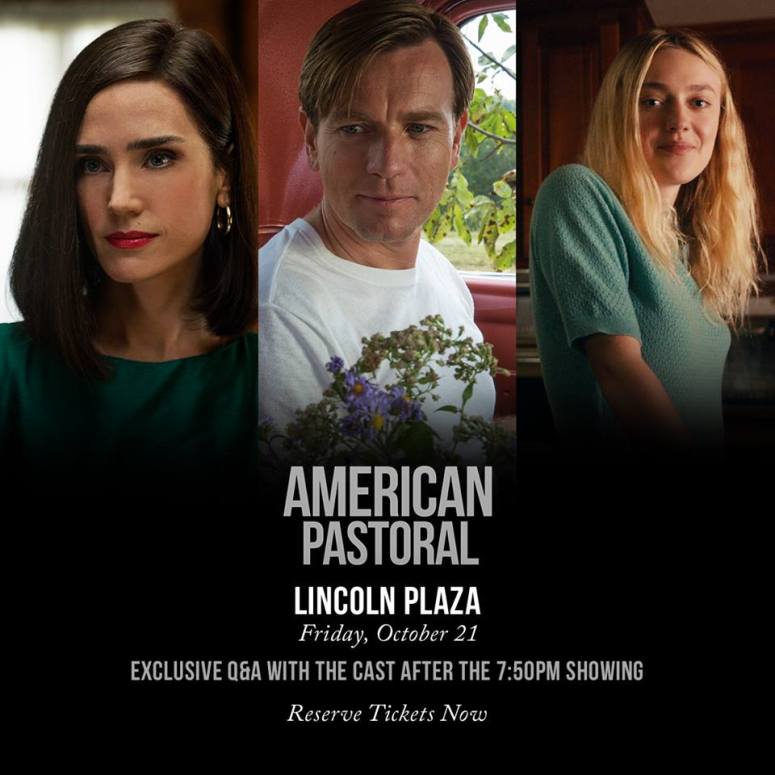 Sorry that the video was cut off. I should have used a memory card with more space.
From what I could remember I made some notes about the rest of the Q&A.

There are spoilers below, so you have been warned. Go see the movie and then read my post.

Jennifer Connelly unfortunately couldn’t make it because she was not feeling well. But the q&a was about an hour long, very insightful and at times funny.

Ewan signed on as director right after he finished performing in The Real Thing on Broadway. He spent 9 months doing prep-work and he had an office in LA, at the movie studio, where he’d work from 9-5. In the beginning, and this is something he said he would change next time he directs, he would sit in his office wondering, “now what?” The audience laughed with him then.

(Side note: The audience loved Seymour’s father. He was funny and always got a laugh. I especially liked when he gave his very honest opinion at the art gallery.)

He spent a lot of time going over the script and the book. He said when many actors get a script and read it they visualize the scene, but what ends up on screen is different. Being the director, what you visualized ends up in the film.

He learned a lot of what to do and what not to do from directors he’s worked with.
(My sister thinks he was speaking of George Lucas when he said “what not to do” but she’s no mind reader so he could have meant anyone.)

Ewan said he learned a lot from Danny Boyle. Danny will clear the room so the actors can rehearse without the crew’s eyes on them.

Dakota doesn’t like to rehearse a lot. She prefers to just go in that day and feel it.

There was a question about the author of the book and his involvement with the production. Philip Roth approved the script and signed off on the rights. He was not involved in the making of the movie, but saw the film. No one knew that the producers let him see it. Roth sent an email to their agents asking them to tell them that he liked it.

The father-daughter kiss scene was brought up by the moderator. Seymour and Merry don’t kiss in the film, but it was a really uncomfortable scene to watch.

Here is what Ewan said of the scene: In the book Seymour does kiss his daughter. They go to the beach and he picks her up because the sand is hot. She then asks to be kissed and he gives her a peck. She asks again, explaining that she wants to be kissed the way mommy is kissed. It happens only once and the taboo is discussed in the book.

The kiss was never in the script. Ewan (and I think the audience too) was glad because then the whole movie would have been focused on that one moment. But Ewan wanted the understanding of the scene from the book to show in the movie. That this moment was the switch of Seymour’s perfect American family. Everything changed from then.

In the book the character thinks back on two moments to see where it all went wrong. One was their kiss, and the other was when she saw the monks burning themselves in TV. Merry had become upset and obsessed about the monks.

On to a lighter topic, the music. Alexandre Desplat did the score. I like his work.
I really liked the use of the 1960’s pop-rock music. Especially the scene when Seymour was looking at Merry’s radical pamphlets in her room to the song “For What It’s Worth” by Buffalo Springfield.

Ewan said that the opening song, “Heaven On Earth,” came to him when he was in the shower. He was singing it and decided it sounded good for the film.

The song that Merry plays in her room, when he tells her to turn it down, he wanted to use “Voodoo Child” by Jimmy Hendrix but Hendrix is too expensive. Jefferson Airplane’s “Go To Her” was used instead.

The last process of directing is the sound mixing. Ewan was in the studio and was presented with different types of moos for cows. High moos, deeps moos, long moos. Ewan mooed to give examples, which was so funny. I forgot what question was asked that that answer pertained to, or where it lead, but hearing Ewan moo was funny and we all laughed. Too bad I missed recording it. Oh well.

I’m going to end on this highlight of the evening. I asked a question! It was not deep, intellectual question, but Ewan’s answer was very satisfying to hear.

I asked if on the DVD we’ll get to hear cast commentary and would there be a director’s cut.

Happily, the film we saw is the director’s cut. Ewan said he didn’t feel he had to compromise to take anything out or add anything that he didn’t want to. What we saw was his director’s cut. He also would like to do a cast commentary.

He embellished more but we were making eye contact and my heart was hammering in my chest so that’s all I can remember.

I’m thinking of doing a more in-depth review of the film. I’d like to see it again first.

If it’s playing by you, go out and see it.

I am so glad I went on Facebook before bed and found out about this event. I had been out late and knew I should have gone straight to sleep, but of course I checked FB. Good thing I did!

Based on the Pulitzer Prize-winning Philip Roth novel, AMERICAN PASTORAL follows a family whose seemingly idyllic existence is shattered by the social and political turmoil of the 1960s. Ewan McGregor (Salmon Fishing in the Yemen, Beginners) makes his directorial debut and stars as Seymour “Swede” Levov, a once legendary high school athlete who is now a successful businessman married to Dawn, a former beauty queen. But turmoil brews beneath the polished veneer of Swede’s life. When his beloved teenage daughter, Merry, disappears after being accused of committing a violent act, Swede dedicates himself to finding her and reuniting his family. What he discovers shakes him to the core, forcing him to look beneath the surface and confront the chaos that is shaping the world around him. AMERICAN PASTORAL also stars Academy Award® winner Jennifer Connelly (A Beautiful Mind) as Dawn, Dakota Fanning (The Runaways, The Twilight Saga) as Merry.