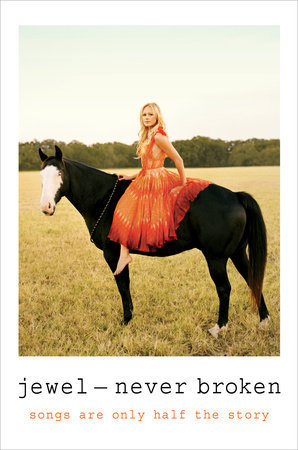 New York Times bestselling poet and multi-platinum singer-songwriter Jewel explores her unconventional upbringing and extraordinary life in an inspirational memoir that covers her childhood to fame, marriage, and motherhood.

As if the heading of my journal didn’t already give it away, but if you didn’t know where it’s from and you googled it you’d see they’re lyrics.

I have been a huge fan of Jewel since I was a freshman in high school. My family was new to cable TV and I was obsessed with MTV and VH-1 (remember Pop-Up Videos!)

I remember seeing her music video for “Who Will Save Your Soul?” and I was hooked. Pieces of You was one of the first CDs I ever bought with my own money (along with Mariah Carey’s Fantasy and Paula Abdul’s Forever Your Girl).

I’ve always loved Jewel’s honesty and the poetic stories she tells in her songs. What’s more is that when you see her live, you can feel it. I can write a whole essay analyzing every song on all of her albums but I will save that for another day.

But there was so much more I learned about her family’s history in Alaska (I love history), her childhood (dealing with divorce, her dad’s abuse, her mother’s manipulations, her time at Interlochen, her anxiety and loneliness), and about her early career. I had no idea her mother caused her to go into debt. I knew they were best friends in the beginning and Nedra was her manager. Then Nedra disappeared and I wondered what happened. Now I know!

What a rollercoaster. After reading what she was like I do believe Nedra is a sociopath. I mean, she lied about having cancer. WTF. She used and manipulated her daughter for her own gain. Nedra would tell Jewel everything that she was was because of her. I can site so many examples but I think you should read the book for yourself.

I am just glad that Jewel was able to walk away from her mother’s manipulative programming, get out of debt, and be the person she was meant to be.

It also warmed my heart (I totally cried) that her dad got the help he needed and they were able to repair their relationship. When he says how proud he is of her and what she overcame, I just start to cry.

Writing Never Broken shows Jewel’s strength and resilience. It’s a good true story to read about overcoming shame, learning to forgive, finding love, learning to be yourself and so many good life lessons. I also liked that it was a bit like a self-help book too.

I feel she was incredibly brave to write it. She’s right that you don’t out run pain. Another favorite part for me was the lesson about “hard wood grows slowly” that if you want something to last it has to be nurtured and it shouldn’t be rushed into being. That makes it brittle. Decisions have to be made not just for the moment but for the long run.

I also loved the parts about her musical upbringing and how she learned to tell stories, develop her own sound and how she can read the audience. I am sure to listen to her songs in a whole new way than I had before. Especially “Goodbye Alice In Wonderland”.

The photos are really nice too. The ones taken at the State Theatre in New Brunswick, New Jersey, in 2013 – I WAS AT THAT SHOW!!!

Some of the many quotes I bookmarked:

Page xix “We cannot always control or avoid what happens to us, but we can control what it does to our spirit.”

Page 4: Her Grandpa Jay had an El Camino in black with a red firebird pained on the hood. Now I know “Race Car Driver” was about a man who gave her ride when her car broke down – but did that line in the song “gonna paint a red flame, firebird on front” come about from her granddad’s car?

Page 96: “Audiences don’t care if you sing correctly. They care if they feel something…Emotional honesty creates loyalty and a life long connection above all else.”

Page 132: “I would try to be as bold as that blue waterfall that had the audacity to liberate itself from stone.”

Did I mention that the album Goodbye Alice In Wonderland is my top three favorite of hers? Spirit and This Way are the other two.

I will end on this last one because it’s such a strong quote.
Page 364: “Hatred is hurt masquerading-it is an energy used to fool someone into thinking they are frightening when in truth they are frightened.”

One thought on “Never Broken: Songs Are Only Half the Story by Jewel”