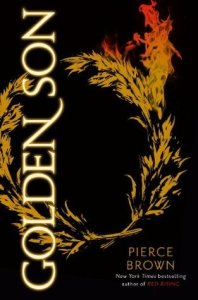 Golden Son continues the stunning saga of Darrow, a rebel forged by tragedy, battling to lead his oppressed people to freedom from the overlords of a brutal elitist future built on lies. Now fully embedded among the Gold ruling class, Darrow continues his work to bring down Society from within.

A life-or-death tale of vengeance with an unforgettable hero at its heart, Golden Son guarantees Pierce Brown’s continuing status as one of fiction’s most exciting new voices.

The second book of the trilogy, Golden Son, came out in January, but before I jumped into the sequel I reread Red Rising. I remembered a lot of the major developments and twists, but really needed to refresh my memory about the details. I found myself gasping as it all came back to me.

I did love Red Rising just as much as I did the first time. Reading Red Rising again was the smartest thing because while Golden Son does occasionally remind you of happened in the first book, it does not waste time with the details. It is best to read them back to back.

Like Red Rising I loved the characters ever changing developing and regressing relationships. There is so much that goes on with the alliances, plotting, and backstabbing politics. You shouldn’t read this while tired but it is also a page turner that is difficult to put down.

The pacing of the story is well done. The story never slows, but even during moments that are not action filled the scene has meaning. There is no filler. There is humor, romance, suspense, jaw dropping moments, and intense caring for the characters. Except maybe for the ones you love to hate.

I saw a reviewer call Darrow a Gary Stu, and I must disagree. He is flawed and makes some mistakes. He learns from mistakes but also is not invincible to never make another one ever again.

I love the evolution of his relationship with Mustang. This is a ship I will go down with. They are my new OTP. I love their intellectual foreplay (that sparring scene!) It is not a love based on shallow feelings but a partnership and in the end a mutual goal. Even if there are bumps along the way.

I love Brown’s prose. The action scenes are some of the most poetic I’ve ever read.

Example:
“He looks like a Miltonian angel falling with wrath and glory. His exoskeleton sheds its friction armor, as Lucifer might have shed the fetters of heaven, feathers of flame peeling off, fluttering behind. Then a missile slashes the sky and high-grade explosives christen him mortal once again.”

Speaking of fallen angels the third book, Morning Star comes out spring 2016 and I need it now! The end of Golden Son. How will he survive that outcome?!

I need everyone in my life to read these books so we can discuss them!

I know there will be another reread next year before Morning Star. 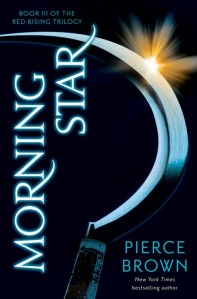 One thought on “Book review: Golden Son by Pierce Brown”